Heel spur is a thorn-like, bony protrusion of the heel bone, which can become inflamed through irritation, thus causing pain. A heel spur forms at the tendon attachments on the muscles of the heel bone as a result of micro-injuries to the tissue caused by overstraining. As part of the healing process for these micro-injuries, the body stores bone material in the tendon attachments as a repair mechanism. Heel spurs can develop over a very long period without causing major complaints. However, irritation of the area surrounding the ossified tendon attachment can cause inflammations. Left untreated, the inflammations can in turn lead to increased ossification and thus to permanent degradation with a risk of chronic manifestation. The normal rolling procedure that we all use when walking is then frequently no longer possible.

The plantar fascia is a thick, ligamentous connective tissue that runs from the calcaneus (heel bone) to the ball of the foot. This strong and tight tissue helps maintain the arch of the foot. It is also one of the major transmitters of weight across the foot as you walk or run. That's why tremendous stress is placed on the plantar fascia. 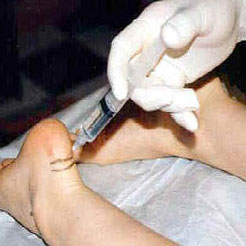 The following symptoms are typical of heel spur. Stabbing pain when treading on the area affected. Dull, irregularly occurring pains in the heel area also without exerting pressure (e.g. in a reclining position) Pain when taking the first steps in the morning (after lying or sitting down for an extended period, especially in the morning) Occasional swelling in the ankle area. For the lower heel spur, extreme sensitivity at the tendon attachment (laterally in the lower heel area) For the upper heel spur, extreme pressure sensitivity of the Achilles tendon, primarily at approximately ankle height.

Most patients who are suffering with heel spurs can see them with an X-ray scan. They are normally hooked and extend into the heel. Some people who have heel spur may not even have noticeable symptoms, although could still be able to see a spur in an X-ray scan.

Get some rest. You need to stay off of your aching foot as much as possible for at least a week. Think about possible causes of the problem while you're resting and figure out how you can make some changes. Some actions that can contribute to heel spurs include running too often or running on hard surfaces such as concrete, tight calf muscles, shoes with poor shock absorption. Ease back into your activities. In many cases, you'll be in too much pain to go ahead with a strenuous exercise routine that puts pressure or impact on your heel. Listen to your body and switch to different activities such as swimming or riding a bike until your heel spurs improve.

The best way to prevent heel spurs is by wearing properly fitted footwear. Shoes should have a shock absorbing tread and soles and should be effective in supporting the heel and arch. Proper warm up and stretching before embarking on any physical activity that will put pressure or impact on the area is highly recommended. Also, just as it?s important for your general health, if you can lose some extra pounds, you will be more likely to avoid heel spurs. If you are starting to feel the onset of pain, it may not be heel spurs, but could be a tendonitis condition that could lead to heel spurs.
« How Shoe Lifts Overcome Leg Length Diff… What Are The Signs And Symptoms Of Infe… »
Profile

When I let go of what I am, I become what I might be.

Login to quote this blog

You cannot quote because this article is private.